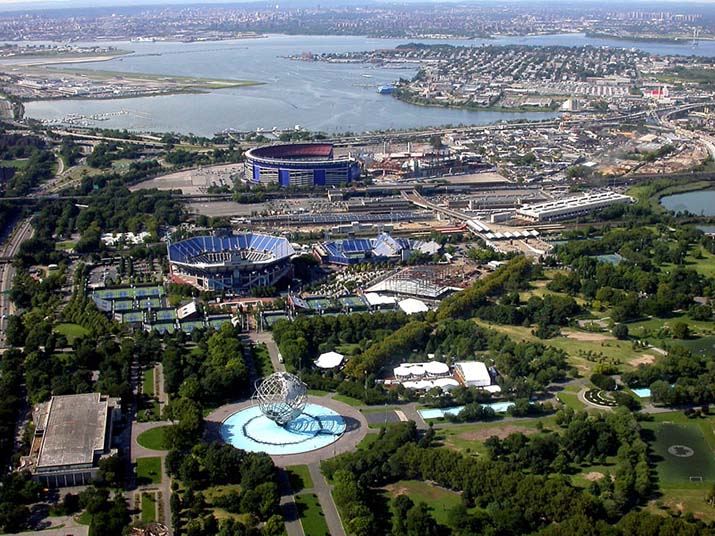 Queens is the largest territory and the second by population District of New York. Its total area is 280 km².

The first settlers, they were migrants from Holland, was appeared on the territory of today’s Queens in 1635. About 300 years ago were established the first settlements -Maspeth and Flushing. In the eastern part of Long Island was appeared Jamaica and Newton. All Long Island, including these areas, was captured the British in 1664. From that moment the next two and a half centuries Queens was consisted of several settlements that were separated by beaches, public gardens, forests, that is no typical for cities. The year of foundation of Queens is considered to be 1683, and it merged with New York, becoming one of its boroughs, only in 1898, that launched the process of vigorous urbanization.

And over the next 15 years it has been built here:

Queens is located on Long Island, which is washed by the waters of the Atlantic Ocean.

The US Postal Service divides Queens into five areas, according to instance division of the New York City:

Traditionally, the Queens is one of the more “suburban” districts of New York. The area of Eastern part of Queens is very similar to the vicinity of Nassau in the north-western part of New York City. The Queens has also several business districts, for example, Long Island City, which is located directly across from Manhattan’s waterfront district. This quarter is decorated by skyscraper is called «One Court Square». This skyscraper is the tallest building in New York City outside of Manhattan, as well as the tallest structure on all of Long Island.

American Television and Film Museum (The American Museum of the Moving Image) was officially opened in 1988. Every visitor of the museum is able to view exhibits related to the creation of film and cinema.

Rockaway, with the full name is The Rockaway Peninsula. This is a series of many kilometers of beaches of the Atlantic coast of Long Island, is a popular summer vacation spot of New Yorkers and visitors of the city. Since the 1830s began active development of this place by elite hotels. At this point, it is quite developed place, but the broad beach Rockaway beach is also a feature that separates the Atlantic from the residential areas of Queens. There is also a pedestrian zone, called the Rockaway Boardwalk, which is built above the beach on stilts. This area is equipped with wooden floors, and is used by amateur cycling and summer walks. But in October 2012, Hurricane Sandy was destroyed most of the buildings, and it is still in the recovery stage.

Flushing Meadows Corona Park, or in abbreviated form Flushing Meadow Park is a natural public park in Queens. It is the second largest park in New York, behind Pelham Bay Park in the Bronx. In it is a wide range of leisure and entertainment. Here you can go boating, swimming sailing, golf, and go on a skating rink (all year round, an indoor skating rink).

Also in the park is located, the New York House of Science, which was built in 1964. At the present time it is a museum of science and technology, the feature of which is the application of innovative technologies in the field of museums, as well as access to the exhibits.

Racetrack Aqueduct (Aqueduct Race Track) – is the largest racecourse in the United States. It is for him was paved the ground station of the New York subway.

Belmont Park (Belmont Park Race Track) – is the racetrack, which in the US is considered second in importance. Every year there are horses racing with thoroughbreds and elite racers. This place will make you a lot of emotions, even if you are not a great expert or amateur racing.

The Botanical Garden of Queens is available to the public all summer. Here you can see a huge variety of flowers and flowering trees, inviting its unique aroma and birds and bees. Here is a shop where you can buy plants and souvenirs.

Queens County Zoo presents many species of animals of North America. It is interesting that in this zoo was recreated the conditions for the animals as close as possible to their natural habitat.

A visit to the sculpture park “Socrates” promises to bring great pleasure. This place was once a dump, and now this area has to ensure that everyone sculptor could create on it its own unique creation. The park often hosts exhibitions of contemporary artists, film screenings and other events of the same kind, visiting of which is absolutely free.

Cathedral of St. Demetrios. It is also within the area of Queens. This cathedral boasts the great arrival of the Orthodox Church throughout the country.

Queens District plays an important role in the transport infrastructure of New York. Two of the three airports of the city are here: La Guardia, which is located in the northern part of Queens, and in the south of the Gulf of Jamaica is located John F. Kennedy International Airport. Communication of the subway New York’s with Kennedy Airport is carried out by means of a special railway.

Suburban Railroad of Long Island Road is coordinated by twenty stations in Queens, with services are in Brooklyn, Manhattan and Long Island. All the ways to Jamaica station are combined; it is considered the busiest in the country.

District is crossed by Route 12 New York the subway, which are forming 81 stations on 7 main lines. A, J / Z, G, these lines connect Brooklyn and Queens without entering the Manhattan, and F , Q, N and R lines connect them through Manhattan; only E,7 lines  connect Manhattan and Queens.

About 100 local bus routes provide the movement of people in the territory of Queens. It also has 15 special express routes that run between Manhattan and Queens and are serviced by «MTA Bus Company» and «New York City Transit buses».

Queens District is crossed by three huge highways from east to west. The start of highway on Long Island is located in the Queens-Midtown Tunnel to the west, and then it goes through the district Neso to the east. Central Boulevard, the final west stop of which is Memory Robert F. Kennedy Bridge stretches eastward to the border of Queens and Neso, where it is replaced by the Northern boulevard. The origins of the Belt Parkway in Brooklyn take Expressway Gouonus and expand to the east in Queens, passing through Kennedy Airport and track Aqueduct. On the border of Queens and Neso, at its eastern end, it branches out to the South Boulevard, which is going to the east and crosses the main boulevard passing to the north.

Queens District is connected to the Bronx:

With Manhattan Queens is connected by:

Queens District inhabit by several ethnic communities living quite compact. The Astoria resident Greeks, blacks – in Jamaica, Latin Americans – in Corona and Jackson Heights, and Bukharin Jews live in Rego Park. Immigrants from India, the Caribbean, Pakistan and Korea began to occupy the land of Queens in the late 1970s – early 1980s. Many residents of the area live in private homes, designed for one or two families, and mostly built after the First World War. At the same time, due to a significant increase of population in recent decades has increased the number of multi-storey residential buildings. Most of the people living in Queens belong to the so-called “white collar”, while a significant percentage of them are working in Manhattan.

Interesting facts about the borough of Queens

In the Queens lived quite a number of well-known artists:

Almost all the houses in Queens consist of five floors.

Exactly in borough of Queens is based all known baseball team – the New York Mets. In the same district held the US Open tennis championships.

Kennedy and La Guardia are in Queens, and Newark is the largest city in the neighboring state of New Jersey. Moving from Manhattan to Newark is 20 minutes away.

The highest prices for apartments in Manhattan, further housing in the price range follows Brooklyn, and a small margin third place is Queens.

East River, despite its name, it is not the river. In fact, it is the ocean strait, which separates Long Island, located on it with Queens and Brooklyn from the Bronx and Manhattan.

Here such it – Queens, the largest district by area in New York. Being here is to walk around locations of its attractions and share with us your impressions in the comments to this article!